African Honey Bee (AHB). Why you want to know about them.

Not typically found in Maryland but as our climate changes to different zoning this may change.

African Honey Bees are native to the Savanna country of eastern and southern Africa thusly they are referred to as Africanized honey bees (AHB). These bees’ genetic roots come from “Apis mellifera scutellata”. The African honey bee was first introduced to Brazil in the 1950s in an effort to increase honey production; but, in 1957, 26 swarms accidentally escaped quarantine and, since then, have spread throughout South and Central America and arrived in North America in 1985. These bees have spread throughout South and Central America, Mexico and the southern United States. They more than likely possess behaviors which make them undesirable. They are sometimes called “Killer Bees”.

Africanized bees were discovered in the USA around 1985 in California’s San Joaquin Valley. Then colonies were in Texas in 1990. Arizona  in 1994  where 15 percent of the bee populations had been Africanized; today it has grown to 90. Despite the AHB displays of aggression they have now become the dominant type of honey bee for beekeeping in Central and South America partly because of their genetic dominance as well as that they are superior honey producers and pollinators.

Modifications to the AHB strain has been able to produce less aggressive strains done, both selective breeding and natural selection. By selecting only the most gentle, non-defensive races, beekeepers have, over centuries, eliminated the more defensive races and created a number of subspecies suitable for apiculture. The most common Europe bee race used in the United States today is the Italian bee, Apis mellifera ligustica.

Africanized bees are tropical bees and have no winter honey storage behavior. 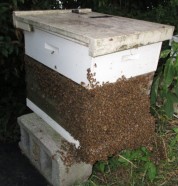 These bees (A. mellifera scutellata) however have been shown to generate three times as much honey as traditional European honey bees (Winston, 1992), which apparently do not adapt to tropical regions. Honey is readily consumed for the colony’s reproduction with population growth so while significant honey is produced; most is consumed and not stored in the hive’s honeycombs. Drones are born rapidly and in large numbers. Africanized bees tend to be more individual foragers than European bees and can forage well in times and areas where the flow of pollen and nectar is weak. Africanized honey bees swarm frequently. Responding quickly to seasonal changes, pollen or nectar shortages, they will very often swarm six to twelve times per year. They will abscond and take-over of nests of European honey bees. This is done either by the African bee drones entering European honey bee hives, outnumbering the European drones and breeding with European queen bees. They also send Africanized workers to hives, kill the European queens and thus enable the establishment of Africanized queens in the hives.

are tropical bees with no need for winter honey storage. Their focus is honey production for reproduction. Their nests are smaller and even external to cavities and exposed (Winston, 1992; Camazine and Morse, 1988). They can easily survive outside of nests, and can often be found hanging on the outsides of the nests. They were constantly faced with the threat of destruction from predators at the time Africanized honey bees developed in African Savannahs. By evolutionary selection, they successfully found ways to survive these threats. Three traits, developed in particular which have done much to further their survival (Benson, 1985).

There is very little visual difference in the bees.  They now have to do Genetic tests to tell them appart.

The behavior- not the appearance – of the AHB is different from the EHB. A colony is a group of bees with both a brood and honeycomb to feed them. The colony can be managed (white hive boxes maintained by professional beekeepers) or wild. Bees that are leaving their parent colony and starting a hive in a new location are called a “swarm.” Typically a new queen is reared to stay with the parent colony. The old queen will fly off with the swarm. Scout bees locate new hive sites before swarming, but the swarm may spend a couple of days clustered in hanging clumps in other temporary locations until the bees find a new nesting site. The bees are known to fly several miles and cluster again if needed If they can’t find a suitable location. 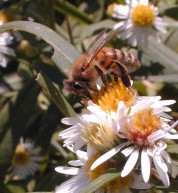 Typically the European honey Bee (EHB) hive will swarm about every 12 months. African Bee may swarm as often as every six weeks. They may even produce a couple of separate swarms each time. Because the AHB swarms more often, the likelihood of your encountering an AHB swarm increases significantly. Despite the “killer bee” myths to the contrary, Africanized honey bees do not randomly attack unlucky victims. Nevertheless, the AHB is highly defensive in protecting their hive, or home. It is better to consistently exercise caution with respect to all bee activity. Best practice is to keep your distance from any swarm of bees. The AHB’s definition of their home territory is also much larger than the European honey bee. At least 100 feet, or the width of a four-lane highway, is a good distance. Again, the best advice is, start moving away immediately if you see a bee hive.

The AHB is far less selective about what it calls home.

The AHB will occupy a much smaller space than the EHB. Known AHB nesting locations include water meters, metal utility poles, cement blocks, junk piles, and house gutters. Other potential nesting sites include overturned flower pots, old tires, and abandoned structures. Holes in the ground and tree limbs, mail boxes, even an empty soda bottle, could be viewed as “home” to the AHB.

The pheromones incite other bees to attack.   A research study in Venezuela by the Entomology Department of Louisiana State University and the U.S.D. A. (Rinderer, 1986) showed several distinct defense behaviors and reactions when a colony is disturbed. They are very sensitive to the slightest disturbance, especially a jolt (Collins et al., 1988). When an alarm was spread throughout the colony, a worker immediately ran into the nest to recruit others. This was done by opening her sting chamber and extending her sting. This action released chemicals which communicated an alert to other bees, particularly guard bees. They in turn, spread the alarm to others and throughout the hive.

It is estimated that three times as many Africanized honey bees respond to alarm chemicals than European bees. The result of the experiment was a colony erupting, with aroused bees pouring out to defend the nest attacking anything near it that moved. The disturbing offender was stung eight to ten times more frequently than European honey bees (Rinderer, 1986). When comparing the sting of the Africanized honey bee to that of the European honey bee there is great similarity. The difference comes in the numbers of stings. (Winston, 1992).

A study in Venezuela by the Entomology Department of Louisiana State University and the U.S.D. A. (Rinderer, 1986) showed several distinct defense behaviors, drone production and mating behavior. Africanized drones are produced in larger numbers than are European drones. They are smaller possessing large mucous glands which give them an advantage the biological competition between European honey bees and Africanized honey bees for sperm depositing into the queens. (Rinderer, 1986).

As mentioned earlier, European colonies are often taken over by Africanized queens who are swarming or have absconded. Although primary targets for for takeover appear to be colonies which are queenless, have failing queens or are small (Rinderer and Helmich, 1991), Vergara (1993) determined that medium to strong colonies are also targets for invasion. Takeovers are done by a queen and a small swarm of workers to gain access to a proven nesting site, food reserves and a labor force of workers (Vergara et al., 1993).

Absconding is different from swarming in that colonies that abscond do not leave behind a young queen, resources or workers. The absconding bees take everything with them and simply leave to establish new hives elsewhere (Camazine and Morse, 1988).

Not all Africanized hives display the typical hyper-defensive behavior, which may provide bee breeders a point to begin breeding a gentler stock. Work has been done in Brazil towards this end, but as mentioned previously, in order to maintain these traits, it is necessary to develop a queen breeding and mating facility in order to requeen colonies and so prevent reintroduction of unwanted genetics or characteristics through unintended cross-breeding with feral colonies. In fact, in Puerto Rico, some bee colonies are already beginning to show more gentle behavior. This is believed to be due to the fact that the more gentle bees contain genetic material that is more similar to the European honey bee although they also contain African honey bee material. Also while bee incidents are much less common than they were during the first wave of Africanized bee colonization, this can be largely attributed to modified and improved bee management techniques. Prominent among these are locating bee-yards much further from human habitation, creating barriers to keep livestock at enough of a distance to prevent interaction, and education of the general public to teach them how to properly react when feral colonies are encountered and what resources to contact. Knowledge is the key and is why the Africanized bee is considered the bee of choice for beekeeping in Brazil.